So we have BlueCat's DHCP appliances (Adonis and Proteus) for many reasons, not least the ability to delegate permissions in a far more granular way than you can achieve with Microsoft's DHCP server. One of the things we rely on, is the appliances' ability to register DNS records on behalf of our Xerox printers which (for some reason that alludes me) are unable to register their own DNS. After a recent upgrade, the units appeared to lose that functionality, which caused our printers (we have 5,000+ of them) to start to be removed from DNS as the 14 day scavenge period kicked in. It is always fun when there is a delay between cause and effect.

Further investigation revealed that printers that were getting dynamic addresses were being registered just fine, but those printers that had DHCP reservations were not. This was due to a setting on the appliances that was missed during the upgrade called "Update Static Leases". Here is a screenshot of the configuration page: 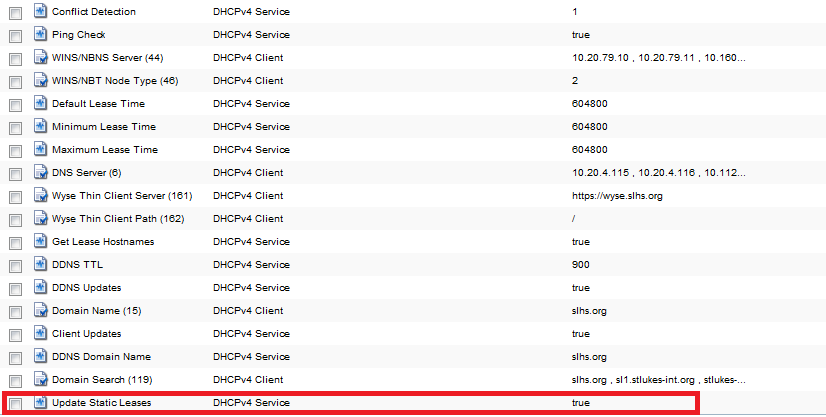 Update #1 4/30/15
A new problem manifested itself. The appliance is now registering increasing iterations of the domain name, which in DNS makes recursive subdomains. A new layer is created every time the printer renews its DHCP lease.

You get the idea, this continues until the FQDN reaches the limit of 255 characters.

Currently, we are working with the vendor (BlueCat) to resolve the issue.

Cheers!
Email ThisBlogThis!Share to TwitterShare to FacebookShare to Pinterest

Employed as a senior IT engineer at a large health system, comprising five hospitals, comprising 20,000 user objects and more than 2000 Windows servers. I am the primary architect and administrator of their Active Directory and internal DNS infrastructure.
A certified associate professional in the Federal Emergency Management Agency (FEMA) and tries to use those skills as a leader in the major incident management team.
Member of the IT Security team.
Reasonable cook.
Struggling author.